I started writing this last week and it’s taken me ages to finish because I have so much to say but also it could probably be more condensed. Bear with….

To anyone feeling like they’re making a mess of their life and unsure which way is up. I have some advice, it may not be the best but it comes from a place of empathy and sadly experience.

Have you ever heard the expression

‘Some people can’t be saved’

Whilst thinking about this I came to the realisation that they can, but they can only really ever save themselves.

I always say that my daughter saved me. Saved me from a depression so deep rooted, so old, it was painted shut, that it’s presence under the surface of my life was always there. If I’m being wholly honest it’s still there sometimes, but it’s not painted shut anymore, it’s not glossed over like a sash window that no longer opens. It breathes. I talk about it, honestly, and the window opens a little more each time.

Shaun helped save me too, save me from another bad decision or a kick off I couldn’t take back. But in the end it was me that picked up the broken pieces and got them ready for gluing back together.

I believe you have to hit rock bottom in order to resurface your new self. Half hearted attempts don’t work. YOU have to work for it. You have to meet your worst case scenario and move up from there, you have to feel like you have no other way to go, and I’ve been there.

I’ve lost friends, loads of them. I’ve lost a job or two inadvertently, because I couldn’t commit. But most of all I’ve felt like I had nothing left to fight for, all the anger and fear I had used previously to power me through another drama was gone. There was no risk of people I loved giving up on me because they already had.

There was no risk of being called names and gossiped about because the worst things had already been said. I had accepted I wasn’t popular because of my behaviour and so came the time I wanted to prove them all wrong. You have to want saving. You have to want to save yourself.

It’s not easy to rebuild your life when you’ve spent so long bulldozing through your happiness. When you’ve been so insecure you’ve picked apart everyone who provided reassurance. I found substance abuse is usually something that fits comfortably along side being depressed, that false sense of ‘everything will be alright tomorrow, after just one more hit’ it won’t. In fact, it’ll probably look much, much worse and you won’t remember what it is you did or said. You won’t remember who you hurt & if you do remember you’ll justify it by convincing yourself they deserved it. They may well have deserved it, but it’s YOUR mental health that will suffer because of your actions, more so than anyone else’s. It’s you that will have to pick up the pieces of your broken life and convince the auctioneer they’re worth something. You better polish them up good, so they’re shining brightly for the highest bidder because if you let them go for less than their value, they’ll be smashed to smithereens again in no time.

I don’t qualify as a mental health expert and I always feel like I’m being really patronising when I try and give advice because I remember so vividly how fucking infuriating it was when all these lovely people with lovely lives tried to help me.

In the end it was the tough love that really did the trick. It was the realisation that I was losing people I loved from my life because I didn’t know how to behave. Some relationships are still beyond repair and that’s something you have to live with when you make mistakes. Now I won’t pretend that a reputation can be erased or easily saved. It my experience, it cant. There are some people who genuinely want to see you fail and some people you might hurt too deeply to expect their forgiveness so if you’re after a quick fix to sort your life out, you won’t find it in redemption. Redemption is life long. Recovery is life long. Looking after your mental health is a commitment you have to make more eternally than any other vow. You have to pick yourself up from the gutter and swallow any pride you ever possessed. Pride is useless it doesn’t salvage anything. It wont protect you, and it definitely can’t fix you. Swallow it, even if it chokes you. Admit defeat even when you feel you were coerced into behaving like a total cunt, just admit that you fucked up. Say sorry, mean it and move on because waiting for an apology from someone who hurt you can easily end up with a life wasted on bitterness and the hope of revenge. Tell the truth even when it’s painful, because people need all the facts before they hand out forgiveness like sweets on Halloween.

So if you’re reading this and wondering if you can be saved. The answer is you CAN but the only person who can save you is you, and it’ll be so worth it.

How’s this below pic for a comparison and a bit of Monday motivation? 9 years later and with a few less bad habits life looks better, but I’m under no illusions that I’m still digging myself up from the hole I dug myself into and probably always will be. The difference is now I want to get out! 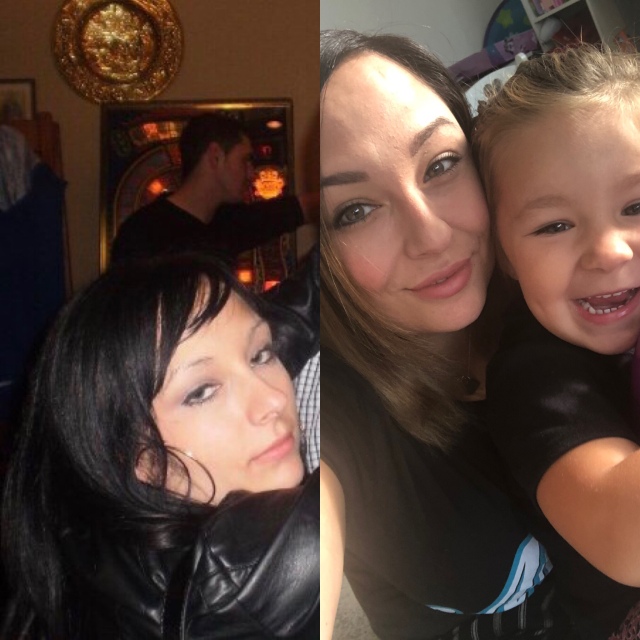