I still get ridiculed for posting about my mental health. I still get judged for being ‘mental’ or ‘dramatic’ or an ‘oversharer’ (self confessed by the way, no fucks)

Why is it that we still can’t accept people speaking out?

They only post for the likes. They’re not depressed, they bring it on themselves, blah blah blah, yada, yada, yada!

Year after year, people are still committing suicide because they were too afraid to speak out about their mental health problems, or they did try and speak out and were shunned or called one of the names of mentioned, or worse.

Social media is great for spreading awareness, but what about real people who reach out and are made to feel stupid, or are judged? Those people are where we should be directing our listening resources. You can repost anxiety references or share mental health charities all over your page, but if you’re ignoring your depressed or anxious friend when she puts up yet another cry for help, you could be missing the opportunity to support someone in need. Donating £5 is fab, but did you text your sister back after she poured her heart out because her boyfriend is a bastard. Or your friend who’s recently postnatal and desperate for 5 minute to have the shower she’s avoided for 4 days. Or your friend who cancels every 5 minutes because her anxiety prevents her from leaving the house? Or the one you rescheduled 5 times because you didn’t want to listen to them go on about their problems?

Of course some people will post for attention, it would be ridiculous to assume otherwise, we all post on social media to ‘share’ and for the ‘likes.’

So what though, if she’s posted something that’s a bit cringe, she’s your mate and she’s asking you to listen.

Nobody expects you to sacrifice your own mental health to save someone else’s, and triggers are very real, but sometimes all it takes is a text to say you’re thinking of that friend in need. Don’t just scroll on by or avoid answering. It could change someone’s whole day and sometimes even their life. Make Time to Talk day a reminder to make not only Time to Talk, but Time to Listen. ❤️

Reasons why you should never ask a Mum when she’s having another baby….

I’ve updated this with extra points to reflect my current situation. I originally wrote this blog after Ciara was born in 2016. The minute people became aware that Ciara is starting school this year, they have been on me with the second kid question, like flies on shit, seagulls to a sandwich. It’s a throwaway question. It’s rarely asked with any intent to upset but there are so many reasons as to why you shouldn’t ask it. Most of my friends know my situation already, so they don’t ask. If they do ask it’s a conversation that is a two way, it’s a chance for me to talk about my hopes or reservations, but strangers? Strangers go straight for the jugular. Strangers need to back off. Auntie Aggy who you haven’t seen in 10 years but proceeds to tell you how bad an age gap is for children, she needs to shut the fuck up. Or Ethel next door giving you the third degree about your biological clock. So here’s my reasons newly extended as to why you should still not ask a mum when she’s having her next child!

1. She may not want anymore. She might be happy with her one beautiful child. Period.

2. She may not be able to have anymore. Your body goes through all sorts of changes after pregnancy and secondary infertility is a very real and very common problem. Please be mindful before you approach a woman you seldom know, with a loaded question like when she’s about to pop another human out.

3. She may have only just got her body back to a perfect 10. (Not me obvs) – but some women are passionate about returning to their pre baby bodies and that’s their choice. Just because you can’t think of anything worse than going on a diet or hitting the gym post pregnancy, remember we’re not all the same.

4. She may be suffering with her mental health and or PTSD from the trauma of her child’s relentless screaming, or her toddler throwing themselves on the floor screaming NOOOOO over and over again, she can’t yet bear the thought of having 2 irrational psychopaths living in her house. Jokes aside – these phases our children go through are not all roses and rainbows are they? Give the girl a break.

5. She may of had such a bad pregnancy that the thought of going through that trauma again, whilst also being a whale with a swollen fanny and fat ankles, just ain’t on the agenda for the foreseeable. If you’ve followed me for a while you’ll know my pregnancy story, I won’t bore you with it again, but pregnancy wasn’t enjoyable for me and no matter how many well wishers tell me it’ll be different with number 2, I still don’t get excited at the prospect.

6. Sex is so much better without another human inside of your abdomen. Ok so if you’ve just had a baby you might not be at it like rabbits, but maybe resurrecting your sex life is on the agenda. You go Goddess!!

7. Her and her partner/significant other only just survived the first baby, give them chance. Babies can have a negative impact on relationships as much as they can a positive one. The early stages can be particularly traumatic and resentment can fester. Maybe your girl isn’t ready for the second wave of hating her other half for his measly 2 weeks paternity leave, or the fact he gets to avoid night feeds whilst she’s breastfeeding.

8. Similar to the above, she may have found herself single, or be going through relationship difficulties, and therefore the next baby seems too far off to contemplate. You wouldn’t ask her when she’s getting her next boyfriend would you? So leave her be.

9. They like spending their money on holidays, date nights and stamp collections. The M Word. It’s a big one. Let’s not pretend money’s not a factor. Yes you will find the money and do your best to survive the financial toll of having a family, but some people want more than just survival.

9. They are just too tired. The first child is just about sleeping through the night at 2, let’s let them sleep a while eh?

10. Their child has disabilities, health problems or learning difficulties that they are navigating their way through and managing. The next baby hasn’t been thought of yet. Their first child needs all of their attention.

11. They had a traumatic birth experience. Birth trauma is very common but also very seldom talked about. Women who have negative pregnancy and birth experiences unsurprisingly might have their reservations about baby no 2. Don’t make them spell it out for you, it’s much kinder to just not ask.

12. Maternal mental illness is serious. It can become life threatening. I was suicidal during pregnancy and for a long while after too, that has had a big influence over my decision to not get pregnant again yet. Women who suffer ante and postnatally with their mental health will naturally be more anxious about going through that experience again or worsening their current symptoms.

13. My baby nearly died. Babies are rushed to NICU often. 44% of full term babies are taken in to special care and it’s scary, that’s without even looking at the premie stats. In fact for new parents, it’s terrifying. Nobody in their right mind would want to go through that twice and the thoughts surrounding the possibility of it happening a second time can influence a mum’s decision on whether to have a second child.

14. Mum has her own health problems and she doesn’t want to discuss them with Doris in the corner shop. So Doris if you’re reading. Drop it, Hun! Contrary to popular belief mums get sick too, and this might be affecting her ability to parent one child, let alone two.

15. It’s not the right time. Maybe the mum you’re questioning has gone back to work and got herself a promotion, or she’s decided to further her career by going back to college to learn a new skill. Maybe they’ve just bought a house and are doing it up. Maybe they’ve got a big birthday coming up and are waiting until after then so they can get suitably shitfaced for the occasion. Maybe it’s just not the right time. And that’s ok.

16. They’ve been trying and suffered baby loss. Imagine getting asked when you’re having another one if you’d just miscarried? 1 in 3 women miscarry. I’ll let that sink in.

17. Finally, my personal favourite: Because it’s none of your business. #justsaying.

Us women often share our thoughts with our friends, so it’s likely if she wants you to know, she’ll tell you. This question of ‘are you having another?’ Or ‘do you want more?’ is honestly I think the most personal question I’ve ever been asked.

It’s likely to get awkward real quick if I start reeling off the above reasons in answer to your questions, so to cut out this embarrassment for both of us, drop the question. We know you don’t mean anything by it. We know you’re just making conversation but you should know, it makes us uncomfortable. (It does me, anyway)

It’s not just the question either, it’s the unsolicited advice that naturally follows…. Why you mustn’t have an only child, or how you’ll regret not doing it sooner if you don’t start now. How no two pregnancies are the same.

We’re not listening. We don’t want to answer you anymore – Our bodies. Our minds. Our families. Our choice. 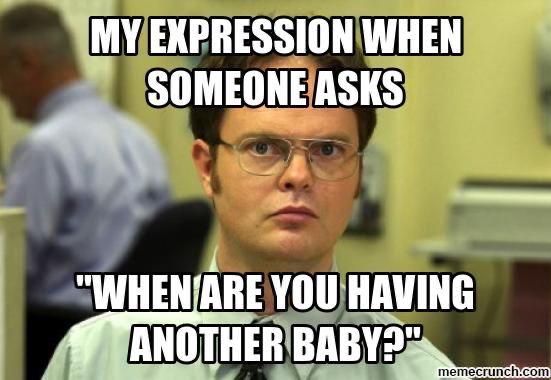